A speech presented at the 2022 Annual Comanchero Rendezvous on June 4th by Marisue Potts, CCM Director, in honor of the late O.R. Stark, our nominee for the local Historical Hero. The highlights of the Rendezvous were the outdoor hamburger lunch, archaeological experts, flintknappers, blacksmiths, an ice cream truck, and of course, the museum displays. Thank you to the volunteers, donors, and visitors who made it possible. 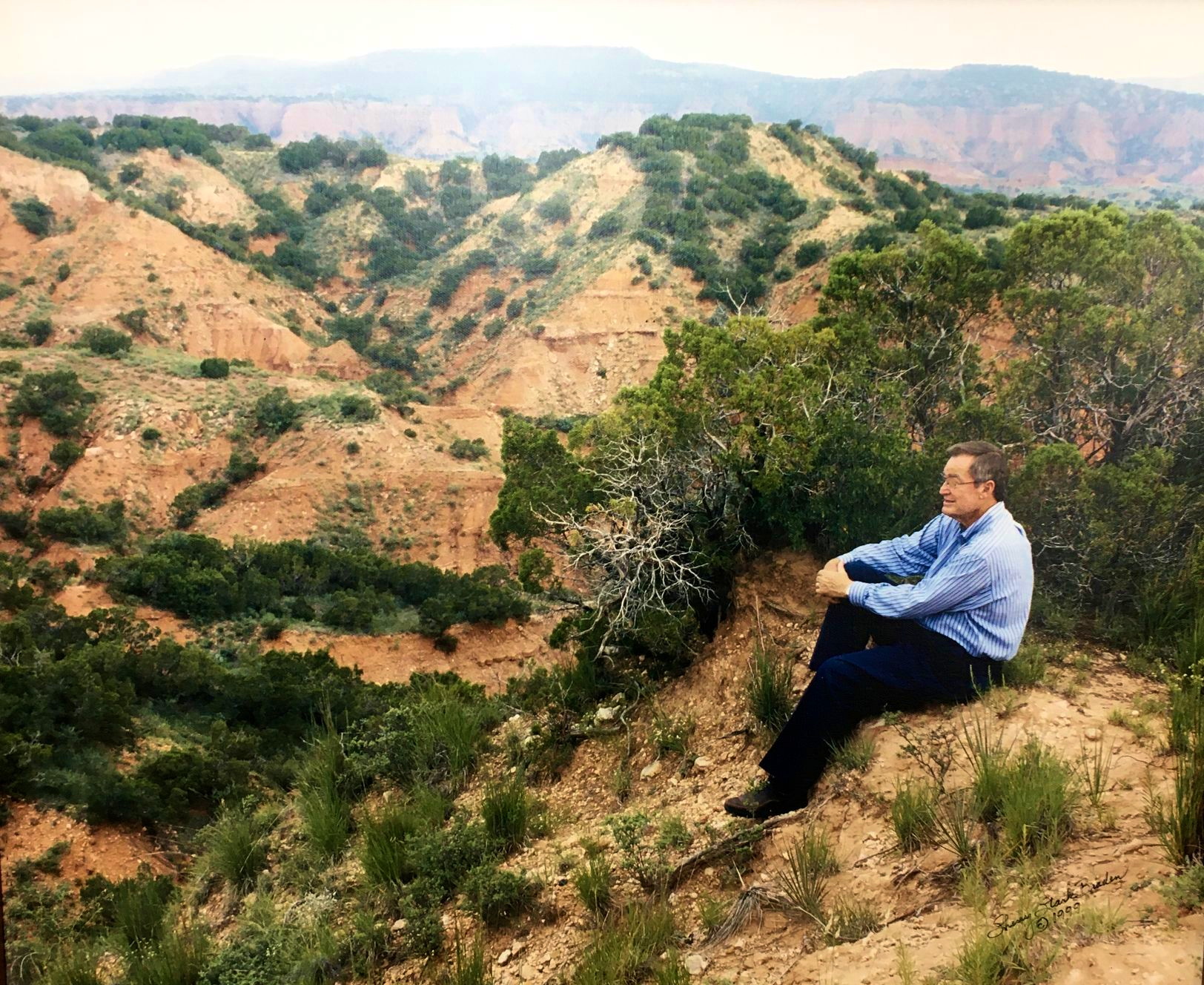 The Comanchero Canyons Museum honored O. R. STARK, JR., at the annual Rendezvous (gathering) on June 4, 2022, as a man who had a lifetime love affair with the beautiful canyons and prairies of the Quitaque area and creatively envisioned ways to share it with others.

My personal introduction to O. R. came around 1983 when the Lubbock chapter of the Daughters of the Republic of Texas chapter was searching for ways to celebrate the coming Sesquicentennial of the Republic, 1836 to 1986. My sister-in-law, Lou Burleson, and I hatched a plan for History Day at the Ranch to introduce 7th Grade Texas History classes to local history on site. In addition, my assignment was researching information on the Texan-Santa Fe Expedition to present to the Texas Historical Commission for a possible historical marker.

Knowing my love for history, my aunt, Mary Ellen “Dude” Barton, a long- time customer of Quitaque’s First National Bank, saved for me a newsletter, Comings, Goings, and Doings, written by O. R. Stark, Jr. He reported receiving a letter from Otho Stubbs, and it included the 1972 report on discoveries Stubbs and Harold Brown made at the Comanchero dugouts on the W. W. Merrell place. I was hooked! My subsequent visit with O. R. at the bank led to a long discussion about the origin of the name Quitaque, the legion of different spellings, and to an introduction to local historian Stubbs. He joined the 75 volunteers who helped Lou and I share the history of Mott Line Camp in the three years leading up to the Sesquicentennial.

Not only were the bank newsletters full of little-known history, but promotion of the farm and ranch economy, personal achievements, wildlife and weather, rain (a record of 45.2 inches in 1997!), and gems of wisdom from an optimist:

Believe Your Life Is Worth Living, and Your Belief Will Create the First.

This is the Best Day the World has Ever Seen, Tomorrow Will Be Better.

By 1987 Comings, Goings, & Doings reported “Marker Ceremony at Camp Resolution,” will offer one of the most important historical markers ever erected in this area, drawing representatives from The 4th Cavalry, Comanchero reenactors, The Masonic Lodges, State Archeologists Curtis Tunnell, and Floyd Co. Historical Museum as represented by Nancy Marble, Bill Gray and myself. Always educating his readers, the well-read O. R. summarized the whole expedition in all its unbelievable drama.

Who was this unusual man, I had only discovered in 1983? A home-grown Quitaque boy whose parents had the only house on the block in 1917, the one with a windmill and a big garden, chickens, a milk cow, and a few hogs. His father, O. R. Stark, Sr., had been in the Navy during World War I, and worked as a cashier for Farmers State Bank, where sundown or dark, customers came at all hours to do business. 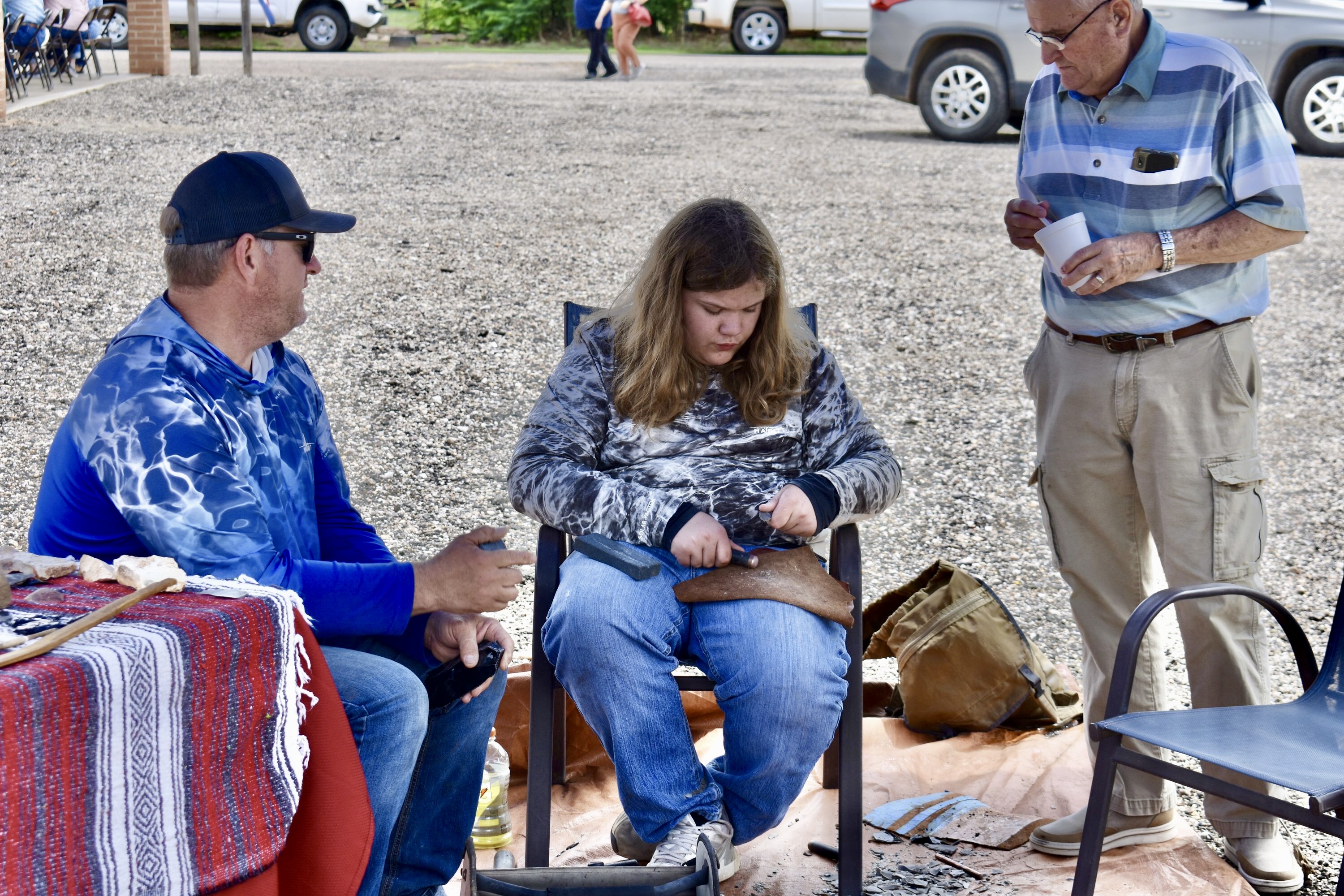 Years later, O. R. Jr. would report that citizens in 1927, on the year he was born, were admonished to “Keep Your Chickens Penned!” as the village progressed into a town. Quitaque became incorporated, the railroad was coming through, and city water wells were being drilled to replace the windmills. By 1928, the Sand and Gravel Company at Edgin/Greymule was worth $140,000, and a new school building was going up to the tune of $125,000. All the community needed, an optimist suggested, was a cotton mill, steam laundry, creamery and ice cream factory, because a barber offered the luxury of a shave for .75 on a week day and $1 on Saturday.

This unbridled optimism evaporated with the stock market crash of 1929.

The crushing depression of the 30’s found other banks closing with cotton down to 4 cents a lb., steak 8 to 10 cents a lb., milk delivered at 15 cents a quart. Land prices were $15-18 an acre. The senior Stark helped organize the First National Bank of Quitaque and served as president from 1927 to 1963. His namesake son, a 1944 Quitaque High School graduate attended Texas Tech, served in the Navy and on his return from World War II, majored in finance and graduated in 1949, the year he married Mary Hartgraves of Sweetwater. The children joining their parents and making them proud were Scotty, Randy, and Sherry. 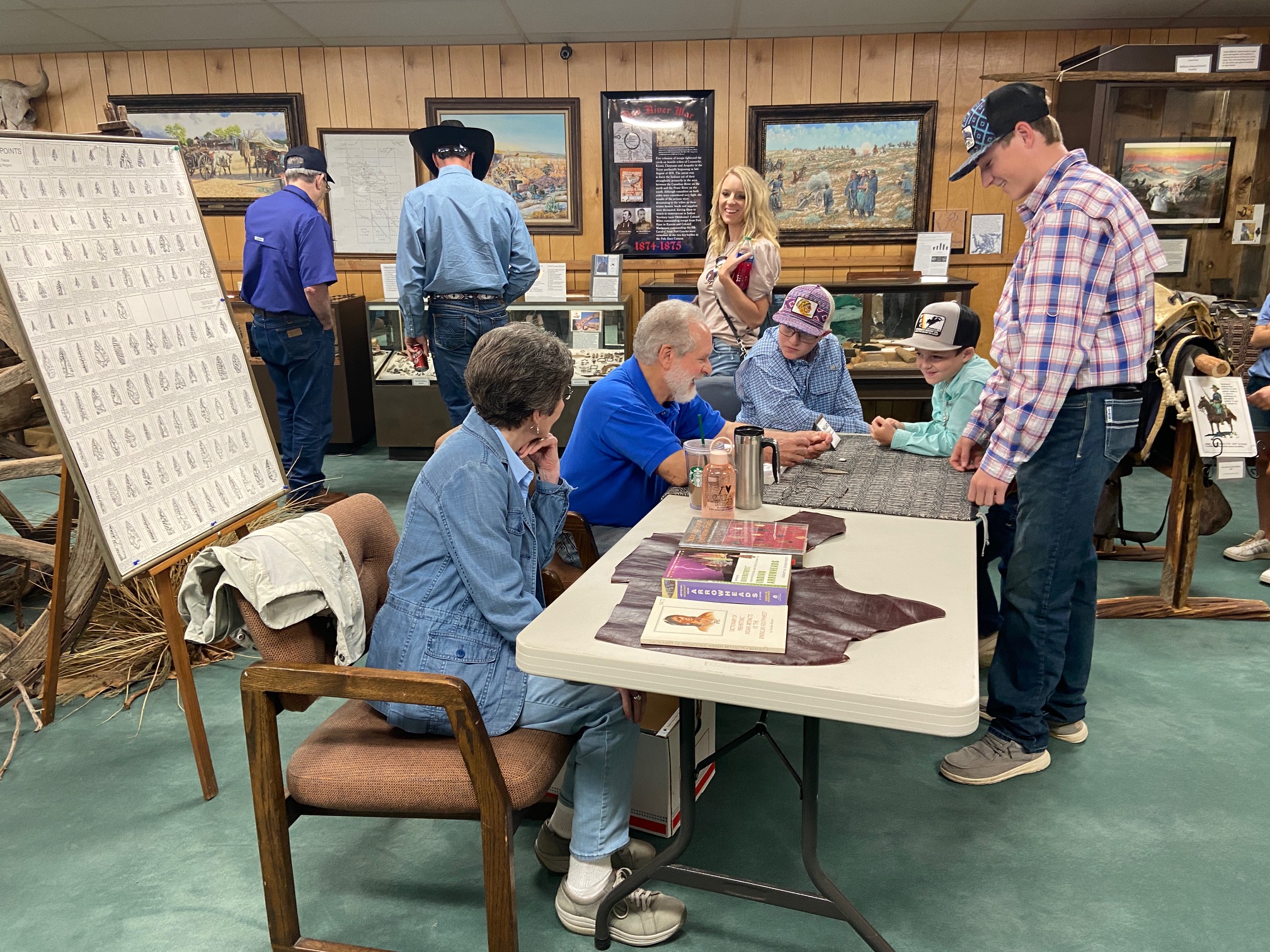 Like his dad, O. R., Jr., also went from cashier to serve as chairman of the board of the QFNB. He also was on the board of directors of Citizens National in Crosbyton and the Texas Bankers Assoc. Locally he served as president of the Lions Club, the Chamber of Commerce, and Caprock Partners, among other organizations, garnering the presidency more than once in some.

In the 1970’s, word circulated that Texas Parks and Wildlife was considering adding a park to the system. The Roaring Springs on the South Pease River was considered but not enough land was available. The Theo Geisler Ranch of 14,000 acres was up for sale and offered much better potential. With the help of Danny Swepston, a TPWL employee and Floyd County native, O. R. got to work, extolling the virtues of the rugged Quitaque Canyon with its stunning vistas punctuated by the Little Red River, bubbles of salt domes, and wildlife habitat. Lobbying, knowing the right connections, and getting the locals behind the project, O. R. had to be thrilled when in 1975 a new state park was announced as “Lake Theo” State Park. A name that later changed to Caprock Canyons State Park. A survey began of the hundreds of archeological sites, construction ensued and by 1978 the park was open. However, O. R.’s work had just begun. Outdoor lunch at the museum.(Photo by Kayla White)

By 1989 the Fort Worth & Denver South Plains Railroad, in operation since 1928, ran its last train through the scenic canyon to the plains. Just three years later, another dream was fulfilled with The Rails to Trails, a Hiking, Biking, Equestrian corridor that stretched 64 miles from South Plains to Estelline. The Trailways guides and panels featured six of Otho Stubbs’ paintings.

Crossing forty-six bridges, going through the Clarity Tunnel in Quitaque Canyon, traversing eight trail heads with challenging stretches ranging from five to seventeen miles, the corridor beckoned to the adventuresome, eager to see the colorful countryside up close by foot, bike, or horse.

I recall my first ride on a horse through Clarity Tunnel with the Panhandle Trail Riders which had made a two day overnight trip from Claude to Caprock Canyons SP. Entering the cave-like, twisting tunnel, the horses snorted at the smell of guano and the darkness of the unknown, until seeing the daylight at the end of the 282 foot-long, rare for Texas, train tunnel. A special lifetime experience for many people like myself. 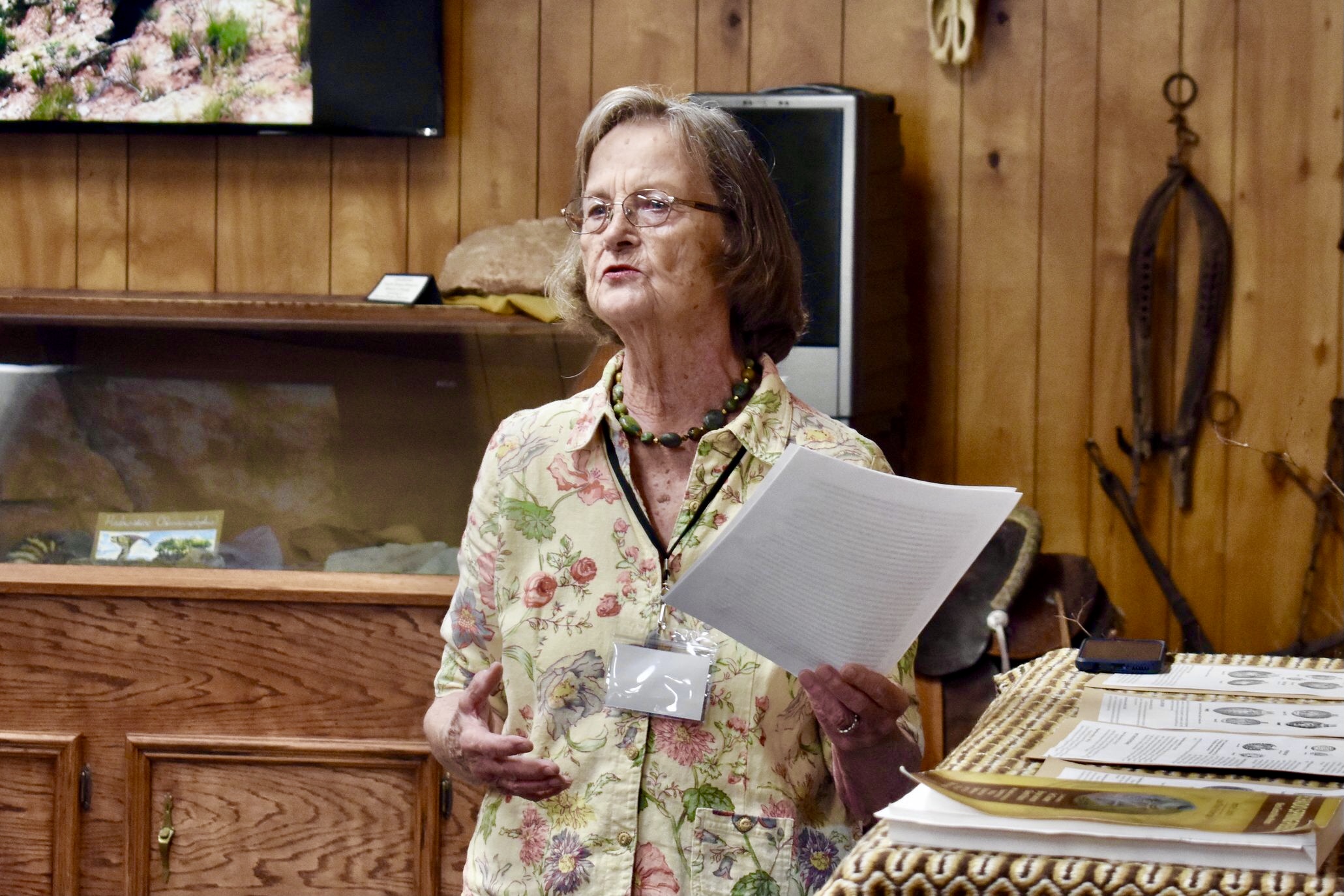 Ever aware of possibilities to promote the state park at his back door, O. R. learned in 1996 that the JA Ranch was up for relocating the Goodnight bison herd of less than fifty head. Naturally, he became a driving force for the local lobbying effort to make Caprock Canyons State Park their new home. With the newly formed Caprock Partners Foundation behind him, once again his efforts became reality and the first of 32 bison arrived in 1997 to a very secure 300-acre paddock, with pens and massive hydraulic working chutes. Several videos about the challenges presented by the bison relocation include the websites of Caprock Partners and Texas Tech Library’s program, featuring Superintendent Donald Beard and History Professor and Reenactor Henry Crawford. Beard related that the bison behave very well around the park visitors, but sometimes he wished the visitors did as well. A recent tally suggested the bison numbers have multiplied ten-fold to about 300 head on 12,000 available acres of the park. I wish O. R. could have lived to see the herd roaming and coming into Lake Theo to drink and know that the yearly park visitations have exceeded 100,000 happy tourists.

One of those many meanings of “Quitaque” suggested to O. R. throughout his career was Quitaque means The End of the Trail. Truly, the End of the Trail came all too soon for our special honoree. He passed away in 2000, leaving a legacy we can only begin to tell you about. To visit with him, however, all we have to do is read one of those many copies of Comings, Goings, and Doings and drive through Caprock Canyons State Park and see the bison strolling along the pavement and resting near the park entrance. That makes me smile, remembering O. R. Stark’s dedication to the cause.